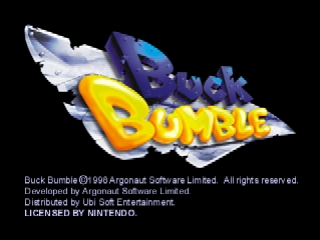 "Right about now, it's time to rock with da biggety Buck Bumble!" As the reggae intro music lets you know, Ubi Soft's cyborg bee Buck Bumble is strapped and ready for action.

Buck Bumble is a 3D action/shooter with 19 levels and over 15 original weapons which Buck uses to blast away mutated enemies from the insect world. The game play takes place in London, after a toxic chemical spill has transformed normal insects and arachnids into an Evil Herd intent on enslaving the world's native insects.

Buck's goal is to destroy the Herd's military installments and annihilate every last mutant bug. The concept is typical good vs. evil, but the action is chaotic and fun. Buck can either walk along the ground or fly through the air, but most of the game takes place in the sky. The game play feels like a WWII dog fight, and Buck's play control is excellent. The B Button serves as a hover function, which allows Buck to turn on a dime and furiously fire at enemies from a stationary position.

Buck Bumble is heavily focused on blasting away hoards of enemies, but mission directives vary from level to level. On some levels Buck must locate keys and destroy barriers to progress, and on others he has to find and capture living specimens of the Evil Herd. All of the missions are closely related to the story line, which will have you thinking like a desperate cybernetic bee.

With pulsating techno music in the background, Buck goes head to head with more types of bugs than you'd find in an entomologist's laboratory. Wasps, beetles, ants, and dragonflies are all on Buck's hit list, but there are also weird creatures like Killa Pillas who appear to be pure mutations with no similarity to our insect world. Big bugs like Transporters and Giz Beetles are heavily armored, so Buck has to pull out the really big guns to wipe them out.

The developers have taken advantage of this epic battle on a miniature scale by including recognizable props from every day life in the environments. You can fly by tennis balls the size of Volkswagens, take a break on a mammoth pop can, or explore the vast open space of a human's kitchen. Most missions take place in outdoor environments, either in a garden, the forest, or the inside of a sewage drain. Some areas are a bit heavy with fog, but isn't that natural for a game set in London?

The adventure quest in Buck Bumble is fun, but the game's two player capabilities steal the show. There is a Buck-to-Buck battle mode, of course, but the real gem is the game's soccer mode. You and a friend each control a cyborg bee, and you have to bump, shoot, and bounce a huge soccer ball into your opponent's goal. It's hard to control a huge soccer ball when you're just a little bee, and the resulting frantic action is surprisingly fun. Four player soccer would be supreme, but it's unlikely that it will be available.

Buck is a cool character who's anything but cute. The future of the insect world is in Buck's hands, and if you know anything about biology then you're aware that human existence is on the line as well. Tie all six of your shoes, clean your antennae, and get ready to rock with Buck Bumble.