Brian Clough's Football Fortunes, is a football management game with a big difference. In an exciting departure from earlier computer simulation games, Brian Clough's Football Fortunes combines an excellent range of computer based features with a fascinating board game. The result for the players is a package which gives the social aspects and skill of other best-selling board games with the flexibility and speed of play which only a computer can supply.

Brian Clough's Football Fortunes can be played by two to five players who take on the roles of team managers. Each manager must successfully steer his team through the season, using his skill to make his team stronger as the game proceeds. He competes with human and computer controlled teams in a ten strong league, and the F.A. Cup. From the second season onwards, each team will also enter one of three European competitions. 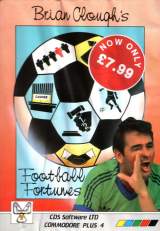