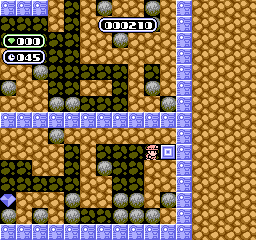 Desription from the back cover:

Stoneford, an old adventurer, ill in bed, called his son, Rockford, to his side. Handing Rockford an old map, he said: "My son, you must take up the quest I never completed. Find the Secret Jewels of the Six Worlds, and you will be rich beyond your wildest dreams!" These were his final words. As Rockford, your quest begins in the strange and perilous Boulder World. An underground world swarming with weird enemies, all out to prevent you from collecting the priceless diamonds just waiting to be mined. Can you master the enchanted walls, transform butterflies into jewels, find the mysterious escape tunnel, and get away from the growing amoeba before it engulfs you? Six different magical worlds of adventure await you in BOULDER DASH!