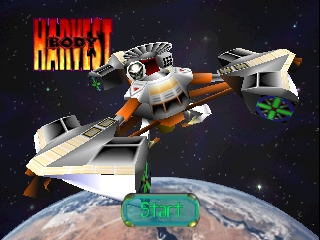 Blast alien bugs and take a 1920's buggy on a joy ride in Body Harvest, a genre-splitting title from Midway. This game offers an abundance of the elusive quality which many games lack: originality.

In this time-warping Pak, an alien species of bug-like invaders have come to Earth. They don't want to take over the planet. They don't want to speak to our leader. They simply want to feed on our flesh in an all-you-can-eat smorgasbord. In fact, the aliens actually introduced humans to the planet Earth, intending to raise us like cattle. The alien bugs warp between different time periods and it is up to you, a genetically enhanced soldier named Adam Drake, to put a stop to the fast food binging.

Body Harvest focuses heavily on action, because the bugs don't have the mental capacity to spar with words. You have to shoot or run over them. The alien insects are big, they're mean, and they're organized. Specific duties are assigned to each different type of soldier. Flying aliens scout the landscape for human settlements and radio the ground patrols when they find a potential meal. There are three different types of baddies which work on the ground: battering bugs to knock down houses, bloodthirsty drones, and quivering gelatinous molds to harvest the helpless humans.

The gameplay uses a third person over-the-shoulder camera position. Drake cannot walk and fire his gun at the same time, but a cross-hair appears on the screen when you are ready to fire. This gives the game an arcade-like shoot 'em up feel.

Between action sequences, the game feels more like an RPG-style adventure. There are five massive worlds to explore, each covering 1,000 virtual square miles. Scattered throughout these worlds are towns and villages, filled with people to talk to and items to collect. The game requires you to solve puzzles along the way, which requires speaking to different people to gather information and clues. For example, in the first area, you have to find TNT to destroy a boulder that is blocking a path. You also have to find a fire truck to extinguish a blaze that the aliens started in an unprepared town.

Even though the worlds are monstrous, the game play progresses in a linear manner. You cannot progress in the game unless specific tasks are completed, and you have a trusty friend who is forever willing to remind you of your current objective.

To add another twist to the game's unusual content, the developers have included more than 60 vehicles for you to control. As you travel between time periods, you will encounter different types of machinery. Driving these vehicles can dramatically alter the gameplay, as when you get in the cockpit of a WWI biplane. Whether you hop in a car or on a motorcycle, the vehicle absorbs all of the damage that you would normally take. Eventually, though, even the hardiest tank will go ka-boom, leaving you a pedestrian target. It can be tricky to aim while driving, but the extra armor the vehicles provide makes them worthwhile.

Hit detection can be spotty, but you don't run any real risk unless you're trying to jump into a vehicle or enter a building. Faulty polygon clipping means you're often staring through a building. However, Body Harvest's huge environments and unique gameplay more than make up for any visual shortcomings. Eat a bug, baby!