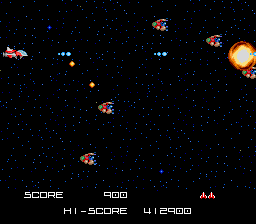 Blazeon is a horizontal scrolling shooter by Atlus and conversion of an arcade game. The Imperial Earth Army has cast a dark shadow over the universe, and its bio-cyborg machines keep any rebel movement under control. In a last attempt to wipe out the evil empire, a group of resistance sends the Garland TFF-01 spaceship to battle the bio-cyborgs, and restore peace to the universe. The ship comes equipped with a basic Vulcan Beam - however, it can also fire Tranqui-Lander torpedoes that allow the player to freeze any bio-cyborg, and to take possession of it. This particular technique is at the core of the gameplay, and each captured bio-cyborg enemy has drastically different weapons and combat behavior - some shoot in three directions whereas others fire laser-beams, homing-missiles or drop bombs. Most bio-cyborgs come with extra special attacks (or fighting techniques), some in limited quantities (such as the powerful fire shield) whereas others are unlimited and can be used at will (homing missiles or bombs). However, bio-cyborgs are vulnerable to enemy fire and they progressively lose firing capabilities as they get hit, and eventually revert back to the Garland ship. Blazeon consists of five long stages (it often features end of level bosses as well as mid-bosses) and is single player only.

The arcade game BlaZeon was originally released in 1992. This Super Famicom port shows several noticeable differences - the original arcade game featured an incredible introduction sequence which was completely removed from the Super Famicom port. A couple of stages were also cut down in size - for instance, the large spaceship (second stage) features less segments and doesn't release the end of level boss, then the third level was heavily edited and was curiously switched around with the fourth stage. Finally, the Super Famicom port includes an autofire option, but the two-simultaneous player mode from the arcade was completely omitted.