Have you ever wondered what it would be like to maneuver a tank through a mine field? The Blasto* Solid State Software Command Module, developed for Texas Instruments by the Milton Bradley Company, puts you in command of an armored tank. The object of the game is to guide your tank through a treacherous mine field, blasting as many mines as possible, or to maneuver around dangerous barricades while firing at the enemy. Depending on the type of game you select, you can:
* Race against the clock, trying to improve your score with each game.
* Play against a friend and try to hit the other tank, as well as the mines in the field.
* Increase the speed of the tank as your skill improves. 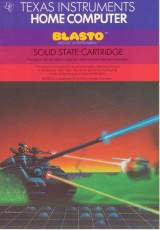