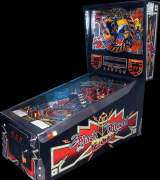 Click to enlarge
(members only)
Williams System 11B
Model Number : 563

Released in April 1989. This game was the first game to implement two features that would become common in modern pinballs : the 'Hurry Up' mode, and the 'Wizard Mode' (a special high scoring mode).

Game has two different plastic artwork versions for the upper play-field : 'futuristic-style' and 'stone castle-style'. These differing plastics appear around the lock assembly, near the 'W.A.R' lanes, as the upper ramp cover, and as the 'Magna-save ready' sign. Reportedly, the futuristic artwork may be the earlier design.

* W-I-N Lanes : Increases the bonus multiplier and lights 'Ransom' at the drawbridge.

* W-A-R Lanes : Starts 'Hurry Up' (countdown timer) when completed; shoot the ball up the Skyway ramp to collect it. Also, during Double Knights Challenge, scores a million points if completed.

* Skyway Ramp : Scores the 'Hurry Up' and the Skyway Bonus, as well as an Extra Ball, if any of them is lit.

* K-N-I-G-H-T Targets : If all the targets are hit within a set amount of time, a letter in B-L-A-C-K is spotted and the kickback and the Magna-Save is re-lit. Lighting all the letters in B-L-A-C-K lights the 1 million-point Skyway Bonus (which is collected at the ramp).

* U-Turn Loop : Scores 25,000 points for the first loop, and increases for each consecutive loop, maxing out at 250,000 points. Also lights the Challenge Lane for 'Double Knights Challenge'.

* Lightning Lane : Spins the Lightning Wheel for a random award (when lit); the ball is kicked to the upper playfield.

* Challenge Lane : When lit, it starts the two-ball 'Double Knights Challenge', in which completing the W-A-R Lanes score 1 million points, and lasts until you lose one ball.

* The King's Ransom : The game's 'Wizard Mode'. It starts after all six letters of R-A-N-S-O-M is collected (as shown on the backglass). In this mode, EVERYTHING is lit for a limited amount of time : Unlimited balls, 3-ball Multiball, the Bonus Multiplier is maxed out and held, Jackpot is lit at the drawbridge, 'Double Knights Challenge' is lit, Extra Ball and Skyway Bonus are lit at the ramp, and the U-Turn Loops are maxed out at 250,000 points!

The most important shot to learn is the Skyway. You should practice it to the point where you can nearly always one-touch a ball draining off the upper playfield right back up into the Skyway off the right flipper, preferably without trapping it first. This one shot will make your score skyrocket, since it prevents draining and sets you up for big points from Hurry-Up and extra balls galore from the Loop.

On the upper playfield, learn to make Loop shots; they're the key to extra balls, and with practice you can also learn to drop the ball into the WIN lanes to light Ransom. When Hurry-Up or Extra Ball lights on the Skyway, don't be afraid to let the ball drain to the lower playfield to collect it; once you've practiced the Skyway shot sufficiently, the reward is well worth the minor risk. Also, it's vital to learn the art of nudging the ball around the WAR lanes; a good player can nearly always make the ball dribble its way across the tops of the lanes to the upper flipper, keeping it on the upper playfield, and probably getting credit for at least one of the lanes in the process, even on a machine with pretty tight tilt settings.

During Multiballs, you pretty well have no choice but to learn to deal with the lower playfield. The Challenge Lane will hold onto a ball going into it for about ten seconds before letting it go, which is a good way of getting a ball out of the way. Also, don't forget the Lightning Lane; even if it's not lit, it still gets the ball back to the upper playfield. Multiballs are also a good time to shoot for the KNIGHT targets, if you need to relight the Kickback or Magna-Save; with all the balls bouncing around, you'll hit your share of drop targets anyway. It's recommended to NOT shooting at the drop targets unless you need to relight something; every time you clear them, the timer accelerates, so it gets that much harder to clear them when you actually need them. And the
bonus for completing BLACK is pretty paltry; you can get much greater rewards by concentrating on the upper playfield and making your Hurry-Ups.

During King's Ransom, concentrate on making the Skyway and Drawbridge shots at least once each, since that's where the big points are. Don't mess up your shots with the balls already on the playfield just to plunge a new ball in (unless you're going to use the new ball to shoot for the Jackpot); in particular, if a ball pops into the plunger lane with less than 5 seconds left in King's Ransom, and you're confident that you're not going to lose one of the balls in play in the next few seconds, leave it there! It's effectively an extra ball; when King's Ransom ends, just leave the other ball in the plunger lane, and plunge it out when you finally lose the last ball in play.