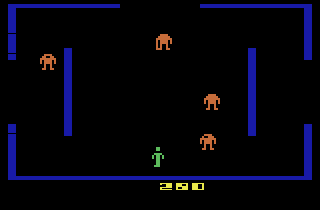 Your challenge in BERZERK is to score as many points as possible without being destroyed yourself. In some game variations, you must elude the robots' expert aims and escape Evil Otto.

BERZERK includes 12 exciting game variations. Before describing each of these games, we would like to acquaint you with game play terminology.

BONUS LIFE
In addition to the three lives you start the game with, extra lives can be won in certain game variations. For example, in Game 1 you receive one new life every time you score 1,000 points. The computer congratulates you with a little tune each time you win another life. A maximum of six lives can be displayed on the screen at one time, although you may have more lives in reserve. The number of lives you can win in these game variations is 255. After that the counter resets to zero and you must start winning bonus lives all over again.

INVINCIBLE EVIL OTTO
When Evil Otto is invincible, he keeps coming at you. There is no deterring him. You can only escape him by running out of the maze.

REBOUND EVIL OTTO
Some games feature a reboud Evil Otto, in which you can actually shoot the grinning head with your laser and he will disappear for a few seconds. Beware! Evil Otto will soon reappear to continue in pursuit of you. Zap him again and he will disappear again. You can make him rebound an infinite number of times.

NON-SHOOTING ROBOTS
In some game variations, the robots aren't armed. You can stand right in front of them but they can't shoot you. Take care, you will still lose a life if you touch one.

GAME 1
In Game 1 you receive an extra life every 1,000 points, there is no Evil Otto to pursue you, but watch out for the robots - they'll be shooting at you!

GAME 2
Game 2 offers a bonus life every time you make 1,000 points, the robots fire at you and Evil Otto rebounds when you shoot him.

GAME 3
You win a new life every 1,000 points in Game 3. You'll need all the lives you can get because in this game Evil Otto is invincible and the robots stalk you with their lasers.

GAME 4
In Game 4 you have the opportunity to gain a new life every 2,000 points, there is no Evil Otto, but the robots are militant and you must dodge their deadly laser beams.

GAME 6
Win another life every 2,000 points in Game 6. But watch out for invicible Evil Otto and combatant robot goons.

GAME 7
In Game 7 there are no bonus lives and no Evil Otto. You have only the laser-firing robots to contend with.

GAME 8
Game 8 offers a rebound Evil Otto. Otherwise it is exactly like Game 7.

GAME 9
For a real BERZERK challenge, try Game 9! Here, Evil Otto is invincible, the robot gangs are armed and dangerous, and you have no bonus lives to prolong game play.

GAME 10
In Game 10 you have the opportunity to win a new life every 1,000 points, the robots don't shoot, but watch out for Evil Otto - he's invincible!

GAME 11
You can really rack up the points in Game 11. The robots don't shoot, Evil Otto rebounds and you get a new life every 1,000 points.

GAME 12/CHILDREN'S VERSION
This is the easiest of all BERSERK variations. In Game 12 there is no Evil Otto, the robots don't shoot at you, and you win a bonus life every 1,000 points. It's a good game for beginners or young children.