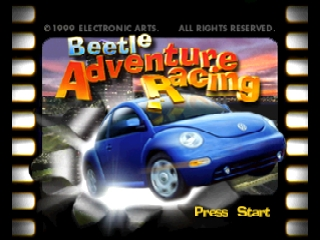 Superb track design, a bodacious battle mode and a fleet of everyone's favorite impish car peg BAR as the the most innovative racer in a long time, bar none.

The VW New Beetle may not be the fastest car on the market, but it's definitely one of the most intriguing. Even though the VW Beetle has represented peace, love and great gas mileage since the 1960s, this new racing game from Electronic Arts is no lovefest.

Beetle Adventure Racing has the look of a gritty realistic racing simulation, but it has the power-ups and huge jumps found in arcade racing games. You'll be driving shiny Beetles through movie theaters, over volcanoes, across a mini-Stonehenge, and over terrain that ranges from ice to sand. Apparently your Beetle is even equipped with a time travel option, because on one track you'll come face to face with a T-Rex. Now that's a feature that can raise the sticker price in a hurry!

To be sure, Beetle Adventure Racing has plenty of sim-like touches. First-rate play control allows each of the three standard and eight hidden cars to respond differently, depending on its handling, acceleration and top-speed characteristics. Tactical downshifting plays as big a role here as it did in F-1 WGP. Fog and popping are virtually non-existent, even in two-player vs. mode.

Putting the Adventure in Beetle Adventure Racing are some of the trickiest tracks to grace any racer. Within the fairly simple Coventry Cove course lurk shortcuts through train tunnels and over a sailboat. The most complex track, Metropolitan Madness, is a virtual honeycomb of driveable alleys, parking lots, train tracks, warehouses, movie theaters and hotel halls. Exploring it is just like, well, exploring a real city -- except there's no police officer to pull you over.

The two regular and four hidden courses are long, easily taking three minutes or more for each lap. All races last three laps, with the shortened last lap tailing off into an all-new finishing stretch.

You can't see many of the choicer shortcuts until you've practically passed them, while others lie concealed between boulders, shrubbery and other cleverly placed obstacles. Carefully placed in almost every shortcut is at least one Bonus Box.

In all, each track has 100 bonus points taking the form of Bonus Boxes worth as many as 10 points apiece. Naturally, the more artfully concealed Bonus Boxes are worth more. If you collect 50 bonus points, you'll win a continue, which will help your quest in Championship mode to unlock hidden tracks. Collect all 100 points in a track and you'll open up a hidden Beetle Battle arenas.

Because the devious developers have scattered Bonus Boxes hither and yon, you won't be able to score a perfect 100 unless you drive three different routes as you complete your three laps. To make matters more difficult, if you take too long to finish pointing, you'll be disqualified, as will all your earnings.

The unorthodox weaponry in the four-player Beetle Battle includes a soupy fog and a speed reducer. You can also find more conventional missiles and mines. Beetles that take too much damage cough up Ladybug icons. Be the first to collect a set of six Ladybug icons and, just like John Lennon, you'll be crowned head Beetle. Initially, Beetle Adventure Racing only allows you to battle in three arenas.

Much as Diddy Kong Racing did a couple of years ago, Beetle Adventure Racing has broken the rules of the racing genre and set some new ones. Any player with a taste for high-octane action should take this Pak for a wild ride.