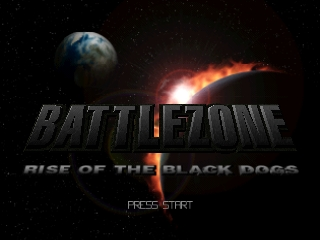 Far from a direct port of the hit PC game, Battlezone: Rise of the Black Dogs features new modes and a game engine optimized for the N64.

In the strategically oriented Commander mode, you obtain and store resources, manufacture new units and command units in battle. The widely varying mission objectives include reconnaissance, defense, offense and establishing and maintaining bases.

In the two-player Pitched Battle, each player commands a squad of teammates. In four-player Death Match, it's every soldier for himself.

The Turok-like controls use the C buttons to control movement direction and the Control Stick to aim up and down. The B Button turns off and on the cockpit view or, if you're on foot, switches between a first-person and third-person viewpoint. The R Button initiates vertical thrusters in vehicles.

Battlezone features more than 30 different weapons, including a mortar, minigun, plasma gun and something called the Thumper which, presumably, shares nothing but a name with Bambi's rabbity pal.