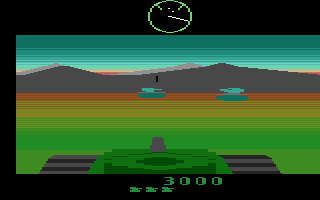 The year is 1999, and the nations of the earth have declared a world-wide peace plan. But there is a problem with the proposed truce. A council of military commanders has unleashed battalions of automated weapons into the countryside. These aerial fighters, flying saucers, tanks, and supertanks will turn the world into a lifeless landscape unless you can stop them.

Luckily, you've discovered an old military tank hidden inside the museum. Use your joystick to steer the tank as you search for enemy automatons. Since your electronic periscope only gives you a front view from the tank, you'll have to rely heavily on your radar screen to detect the enemy. If you see a blip on the radar, you need to move fast! Use your joystick to turn your tank until the enemy appears on the screen, and press the red controller button to fire your turret gun.

You have five tanks to complete your mission. Your tank will be destroyed each time it is hit by enemy fire. The enemies you'll encounter are:

TANKS - Tanks are your most common enemy. They move a bit slower than your tank, and can be identified by their blue turrets.

SUPERTANKS - These look like regular tanks, but have yellow turrets and can move faster than your tank.

FIGHTERS - Fighters always appear directly in front of you, then zigzag toward your tank. When a fighter reaches point-blank range, it will veer to the side and fire an anti-tank shell directly at you. You can identify a fighter by the "buzz" sound it makes as it flies.

FLYING SAUCERS - Flying saucers do not fire at you, but are hard to hit and can distract you when a tank, a fighter, or a supertank is firing at you.

Use your joystick to maneuver your tank. Plug the Joystick firmly into the left controller jack at the back of your console. Hold the controller with the red button to your upper left, toward the television screen.

Fire your turret gun by pressing the red button on your controller. If you miss a target, you cannot fire again for approximately 2 seconds.