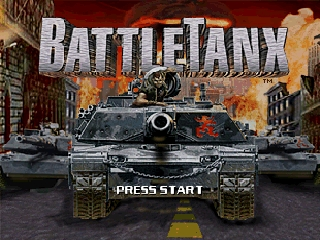 Acupuncture. Aroma therapy. Massage. All of these are useful tools to relieve stress, but nothing takes the edge off like blowing entire city blocks off the map. BattleTanx - the first tank game for the N64 - is an explosive game pak that allows you to unwind, wind up, and annihilate everything in sight.

You have three types of tanks at your fingertips: the standard M1 A1 battle tank, the speedy motorcycle tank, and a giant pavement-crushing Goliath. Battletanx is not a tank simulation, so the controls are easy to get used to and the action is furious. Post apocalyptic power ups include grenades, swarmer missiles, lasers, mines, and even a compact nuclear device that takes out multiple blocks of buildings simultaneously. Guided missiles allow you to send destructive gifts around corners to greet unsuspecting foes. Health points, shields, cloaking devices, and other goodies are scattered around the city to be collected.

BattleTanx is set in the year 2001, after civil war wiped out most of the Earth's males, and a deadly virus left only one woman alive for every 1,000 men. In the lawless aftermath, groups of individuals sought safety in numbers and formed gangs to patrol their own land and also to protect the few remaining women. The women came to be known as Queenlords, and were worshiped as gods due to their crucial link to the survival of human kind. The story mode focuses on one man's search for his lost love, and he must rescue his Queenlord wife by battling across the country and tearing his way through miles of iron and tread.

You have to give 3DO credit for trying to come up with a creative story line, but once you start blowing up enemy tanks you'll be too wrapped up in the action to be concerned with the plot. In the one player game, you'll encounter three basic types of stages: the first is a straight run through an enemy stronghold to reach the rival gangs' territory, in the second you must capture the enemy Queenlords, and the third is a brutal bonus round which challenges you to survive wave after wave of persistent enemy tanks. The wild gangs roaming the country are fierce fighters, bearing names like the Psycho Brigade, Dark Angels, and Nuclear Knights.

You'll quickly notice that the Campaign one player mode is very short, but that's because 3DO designed Battletanx primarily as a multiplayer game. The four player Battlelord mode is like playing capture the flag in a mine field with nitroglycerine in your canteen. Each player tries to capture the other players' Queenlords while keeping an eye on his/her home base. You can instantly switch control from a tank near an enemy's base back to your own stronghold, which you'll have to do frequently to ensure that your Queenlord is not captured. Annihilation and Deathmatch are other modes of multiplayer action, focused more on total devastation than strategic Queenlord capture.

You'll notice recognizable landmarks in the realistic streets of Chicago, New York, Las Vegas, San Francisco, and even Area 51. Feel free to blow up anything and everything, because there aren't any tourists left to appreciate them.

BattleTanx may disappoint players looking for a lengthy one player experience, but it is one of the most exciting, explosive multiplayer games available on the N64.