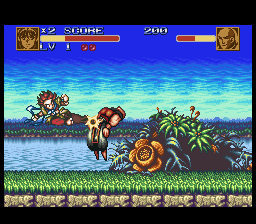 Battle Zeque Den is a colorful side scrolling beat'em up by Asmik. Three girls embark on a journey to defeat some evil forces trying to take over the world. The red haired Rufu can use spirits and magical powers, Kairu is a fast and strong martial artist and Hamusu can use her incredible boxing skills and cute pink gloves. Each girl is associated with a different elemental spirit, namely Fire, Earth and Water. The game counts six long stages and players must pick up their character well as they won't be able to change their mind during the game. Each level is split into small areas and every single one of them needs to be cleaned up to carry on. Early stages have only one wave of enemies per area, but things obviously get more complex later on. Each girl has of course special skills and attacks but button combinations are however the same for all of them. Punches, jumps, kicks and also the ability to grab enemies when close enough or in mid-air. Two kinds of special attacks are available - the first one can inflict medium damages and only consumes some of the health bar when used. The other one, more powerful, can be only used a limited amount of times. Another unusual feature for a beat'em up is the ability for characters to level up through the game. Finally Battle Zeque Den is one-player only.