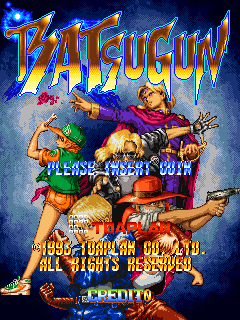 A vertically scrolling shoot'em up game. As is the standard with most arcade shooters, the player controls their ship with a joystick and two buttons. One button (Fire) shoots the main guns, and the other button (Bomb) releases a smart bomb that spreads huge energy balls all around the player's ship.

The player can also grab P icons to increase the power of the current level gun. A maximum of five "P"s can be collected per experience level; getting more after this gives extra points instead.

Collecting B icons increases the number of bombs, to a maximum of 7.

Apart from destroying enemies, points can be gained from collecting golden V-shaped medals. After the level is finished, 3000 points are awarded for every small one, and 5000 points for every large one. If the player's ship is destroyed during a level, all medals collected are lost.