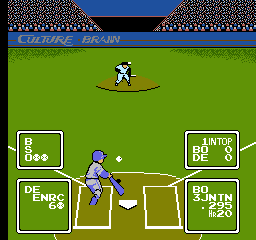 Precise pitching, bulls-eye batting, and far-out fielding! It's all under your control with simple yet sophisticated operation. At last, the definitive baseball action game. With loads of features, it's the ultimate baseball simulation you've waited for.

Play ball with your favorite major league stars, heroes from the past, fantasy leagues - even enter yourself as the star! Enter team and player names and all the important stats for your very own team.

Play a full length season with six teams for 5, 30, 60, or even 165 games. Follow the teams and players through the season - monitor their stats, even get top 10 rankings in batting and pitching.

Add a whole new dimension of fun to baseball with the wacky Ultra Plays. Throw pitches that disappear or speed up in mid-air. Fight back with hits that explode or knock out the fielders. And catch them by leaping hundreds of feet in the air. With the six teams of the Ultra League, you'll play baseball like it's never been played before!