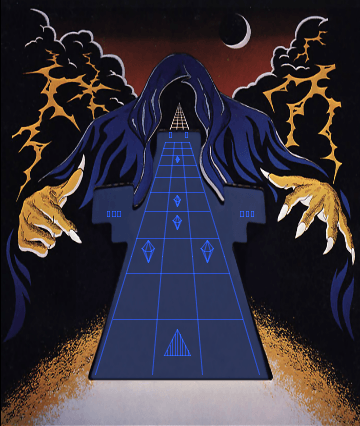 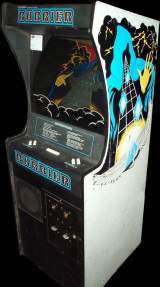 Click to enlarge
(members only)
Barrier ran on the Cinematronics hardware platform, which also ran such games as "Warrior", "Speed Freak", and "Star Hawk". It used a huge X-Y monitor that was almost entirely covered with a monitor bezel that only allowed the small triangular playfield to show through. Around 70 percent of the monitor's total area was hidden from the player. The monitor was too large for the cabinet, it actually poked out through a notch in the back door. The control panel featured a Start button and four directional buttons, even though this title would have been better with a 4-Way joystick. The sideart shows a picture of a blue wizard who has the playfield of the game as his body, and the same wizard is repeated on the monitor bezel that blocks out most of the screen. This game had a metal marquee that did not light up. The marquee graphics were also repeated directly below the control panel, just in case you didn't see them on top of the machine.

The 2nd programmer hired by Tim Skelly, Rob Patton, was only 17 when he joined Cinematronics. This game is very reminiscent of the old Mattel hand-held football games from the late 70's. The gameplay is not as deep, though :o). Vectorbeam didn't have a game to ship after "Speed Freak" and needed a product to sell so Cinematronics sold them "Barrier" and in the words of Tim Skelly, 'laughed our asses off about it'.