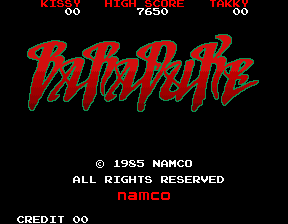 Baraduke is a side/vertical scrolling shooter in which the player walks and flies Kissy through an alien base blasting baddies on the way. The scrolling isn't forced, but players aren't able to go back once they've passed into a new area. Rescuing little rabbit-eared blobby cyclopes will give you a chance at extra hit points. It's not a brilliant game, but there's something oddly compelling about it. The little aliens saying "I'm your friend!" when you save them is much appreciated, as is their willingness to sacrifice themselves by suiciding against the boss monster at the end of every level. 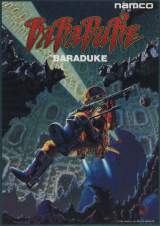