Nintendo 64 cart. published 22 years ago by Nintendo of America, Inc. 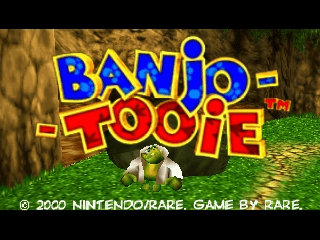 Left for worm food under a huge boulder at the conclusion of Banjo-Kazooie, Gruntilda the witch is back and boy, is she mad. Forming a coven of co-conspirators with hideous sisters Mingella and Blobbelda, Grunty has hatched a madcap plan to regain her former beauty by using the Big O'Blaster (B.O.B.) to suck the life force from B-K's island. Naturally, Banjo, the ever-cheerful bear, and Kazooie, the wise-mouthed breegull who camps out in Banjo's blue backpack, will do everything in their power to stop Grunty's nefarious plot.

Developer Rare (Donkey Kong 64) has greatly extended replayability by adding 14, count 'em, 14 multiplayer games. In keeping with Banjo-Tooie's tongue-in-cheek character, the multiplayer games include daft versions of soccer and bumper cars as well as first-person shooters in which you lock-and-load an egg-shooting Kazooie. Solo players can refight bosses and replay Banjo-Tooie's myriad minigames as often as they want.

The main adventure sprawls across nine vast and endlessly surprising worlds. Lava and ice environments are joined in the brimstone-and-brrr! world of Hailfire Peaks. Shipwrecked aliens, a picture-snapping pig and a sunken temple lurk beneath Jolly Roger's Lagoon. With everything from a cranky French-fry vendor to freaky rides, the way-out amusement park, Witchyworld, has enough charm and challenge for one game - yet in Banjo-Tooie, it's just one world of many.

Banjo and Kazooie have scads of new moves, including the ability to shoot while flying or swimming. Banjo can grab Kazooie by the scruff of the neck and beat on enemies. He can also use his backpack to safely cross lava, carry items and even take a health-restoring snooze. Kazooie can swiftly swim alone and hatch eggs. With special shoes, Kazooie can climb sheer cliffs and dash across water.

You can even control Mumbo-Jumbo, the skull-faced shaman whose magical skills easily surpass his grasp of the English language. Standing on special Mumbo pads, Mumbo can bring aliens back to life, animate giant statues and more.

Mumbo's new rival in the mojo department is Humba Wumba, an enchanting sorceress who holds court in Wumba's Wigwam in each world. Visit Humba to transform Banjo and Kazooie into a submarine, a snowball and even a front-loading washing machine.

Don't worry -- you won't have to know about every new move and item right from the beginning. That's because Drill Sergeant Jamjars teaches them gradually, allowing you to master one skill before moving on to the next. Jamjars is the no-nonsense bro of Bottles the mole, the teacher in Banjo-Kazooie.