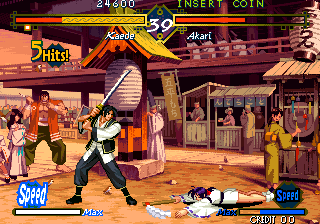 Bakumatsu Rouman - Gekka no Kenshi (translates from Japanese as 'Bakumatsu Romance - Swordsman In The Moonlight') was released on December 5th, 1997.

Parts of Gekka no Kenshi was based off of the manga 'Rurouni Kenshin'.

The Bakumatsu period of Japan (1860-1899) represents the opening of Japanese ports to foreigners. The Last Blade is set during this time period and you can see Europeans in some backgrounds, as well as some European dress influences on some characters.

This game has a lot to do with Japanese religion. In what little understanding of Japanese culture, there are four gods in Japanese mythology : Seiryuu (blue dragon), Suzaku (red phoenix), Byakko (white tiger) and Genbu. Each god is associated with a direction : Byakko with west, Seiryuu with east, Genbu with north and Suzaku in the south. The four gods also seem to be portrayed in an identical manner : Suzaku is often seen as a renegade of sorts, Genbu is often wise, Byakko seems to be strong and Seiryuu seems to be the role of the protagonist. To this end, the four characters that are avatars to these gods in Gekka no Kenshi (Kaede, Okina, Shigen and Kagami) seem to fit the gods themselves to a tee (Kaede to Seiryuu, Okina to Genbu, Shigen to Byakko and Kagami to Suzaku). However, there may be one (unintentional) reference to the entire fighting game itself. These four characters may very well represent the four popular styles of characters found in nearly fighting game :
Kaede is a Shotokan-style character. This type of character, of course, is the earliest type of fighting game character (as early fighting games always had the protagonist be proficient in some form of karate). However, ever since the release of "Street Fighter II - The World Warrior", a Shoto-character refers to a character with similar moves to that of Ryu and Ken from that game, or more specifically, a character with a projectile and a built upper. Kaede fits this property well : his Ittou Hayate is a projectile (much like Ryu's Hadou Ken) and his Ittou Kuuga is a built upper (like Ken's Shoryuu Ken). Of course, Kaede may also be a nod to that of SNK's first fighting game protagonist (Terry Bogard) as well : his Kasshin Fukuryuu super is in the style of Terry's Power Geyser. To this day, many fighting game characters are known as Shoto characters - their simplicity can't be beat.
Shigen is a large character. Large characters come generally in two flavors : the power character and the grappler (Shigen himself is a mix of both). Power characters generally don't move much but deal lots of damage per hit. Grapplers are those whose special moves are mainly throws. These characters tend to last longer because of their size, but have a weakness that they have either short range or are slow (or, in the case of some characters, overly complicated moves).
Okina may be described as a turtler. This may seem like an inside joke (Okina, in his profile, refers to his family as a bunch of turtles), but it sometimes make sense.
Jokes aside, turtlers are not exactly a type of character, but a type of player. That is, a turtler is a player who tend to block attacks a lot.
Charge characters (i.e. those whose repertoire of moves are mainly charge moves) generally fall into this category, as it is often that they need to remain in a blocking position in order to get their charges and counterattack.
Over the years, there have been many incentives to stray away from this style (as well as derivatives thereof, such as ticking), such as guard breaks, overheads, low attacks, shorter charges and unblockable moves.
Granted, the turtler is not as big as a factor as it used to be (the most popular character in "Street Fighter II - The World Warrior" was Guile because of his turtling and ticking abilities), but Okina's reference to turtles remains.
Kagami, of course, continues SNK's tradition of making cheap-ass characters for final bosses.

On the AES version, Musashi and Kagami are playable characters by imputing a code. On the MVS version only Musashi can be unlocked (see Tips & tricks section for more information).

* Play As Musashi : at the character selection screen, press C(x6), B(x3) and C(x4). You must input the correct button sequence in LESS THAN FOUR SECONDS!