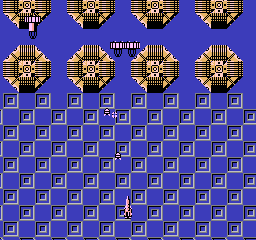 B-Wings is a vertical shooter by Data East and conversion of an arcade game originally released in 1984. The Earth Federation has dispatched its FX-1 prototype star fighter to counter an impending enemy attack. The elite pilot and his ship must both go on a suicide mission deep inside enemy territory. The general gist of the game is to fly though thirty levels, destroy enemy ships, ground installations and massive Gobunasu armored fortresses. Although the FX-1 is relatively weakly armed in its simplest form, it has the ability to equip weapon modules called "Wings". They come in ten different types - Anti-Wing, Cannon Wing, Dyna-Wing, Fire-Wing, Jump-Wing, Hammer-Wing, Multiple-Wing, Side-Wing, Van-Wing and Wide-Wing. Each Wing weapon-module has its own special characteristics - some have a longer range than others, some shoot in a specific direction, some use explosive shells whereas others fire a frontal jet of flames or shield the fighter against enemy attacks. Although the player can select a power Wing at the beginning of the game, a collision with another enemy ship results in the destruction of such module (the second action button also ejects the equipped Wing). Thankfully in these emergency situations, the player has the option to collect other Wings left behind by special flying pods. The second action button also allows the player to dive down for a short amount of time in order to avoid enemy attacks (ejecting the equipped Wing in the process). B-Wings features a two-player alternating option.