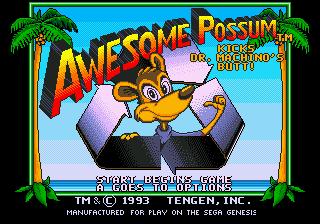 Awesome Possum is here to clean up the world. How can you help? Don't worry - Awesome will tell you. With more than 80 different audio phrases, Awesome Possum is the first Genesis cartoon character who really talks - and he's got a lot to say!

You and Awesome take on the littering Dr. Machino and his chainsaw goods. Clean up rancid rubbish and fight putrid pollution... and collect recyclables to win big points. Test your "eco" knowledge - and score big points - by answering questions about nature and the environment.

So if the bad guys pollute, give 'em the boot! And help save the trees, the ocean and Mother Earth herself! 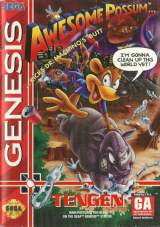