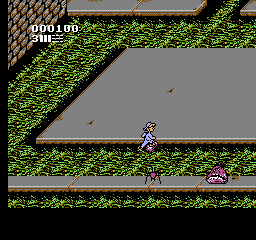 Can no one stop these Vicious Veggies?

Tomato oppression threatens the world! Dr. Gangrene is out to conquer the planet with his army of Killer Tomatoes. Who is mankind's last hope? Chad Finletter, the all-American Boy.

Join Chad on his mission to paste the tomatoes and thwart the Doctor's evil schemes to launch the Doomsday Tomato. He is ready to smash the stem-heads in the sewers and slice 'em up in the streets of San Zucchini.

Luckily, Chad has friends who help him along - Wilbur, his uncle, Tara, the tomato half-breed, and Fuzzy Tomato, Tara's cuddly sidekick. And he'll need their help taking on the likes of Tomacho, Zoltan, Ketchuk and the rest of the Gang of Six. Get ready for adventure as Chad sets out to kick some stem!

All the action and humor from the hit TV series! Hidden friends and items add intensity to the challenge! Only you can stop the mad Dr. Gangrene from painting the world red!

After losing your last life, pressing Down+Left and A+B before the game over screen will make a message pop-up, saying Rob Loves Sandy. This was likely added in by Rob Harris, one of the game's programmers.