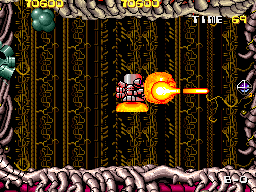 In the 21st century, a blast of cosmic radiation bombarded Terra-12, a deep-space outpost of Earth, hideously mutating all transplanted life. A fleet of savage beings followed the radiation wave and invaded the planet, and began the systematic destruction of all remaining sentient life. Years of battling the alien 'governors' have gone by, and now only one hope survives to avenge the desperate Terran colonists.

The player controls the Atomic Robo-Kid through six stages of increasing difficulty, facing an alien "governor" boss, which are so large as to be considered levels themselves, followed by a "duel" level against other Robo-Kid sized robots. Many levels branch into others, giving the player the choice over which zone to enter next, increasing replayability.

Robo-Kid can collect four different weapons. Whichever weapon is selected is lost when Robo-kid loses a life. In addition to his default gun, Robo-Kid is able collect powerups for a shield that activates on enemy contact, rapid fire, and speed powerups. The player can also encounter a friendly dinosaur-looking robot that sells weapons and shields to Robo-kid using extra lives as currency.

Atomic Robo-Kid was released in November 1988.

In the export (non-Japanese) versions, the highscore table contains only 3 letters. The original Japanese version can contains an entire name.

* Choose Start Level :
1) After inserting a coin, press p1 attack button while pressing 1p start.
2) Enter the code (codes appear after Act5 at the beginning of the level).