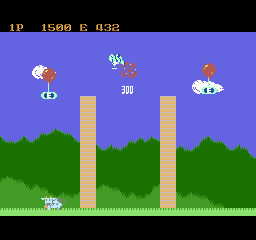 Astro Robo Sasa is a platform/shooter game by Ascii and port of a game originally released for the MSX in 1983. In the Di?ni galaxy, two fearless robots go on a training mission to explore the strange and mysterious M808 black hole. But before flying into space, their training must take them through various areas such as green fields, warehouses or deadly underwater scenes. Sasa and Nana, equipped with an heavy armored suit and a large gun, must explore sixteen locations and collect all the energy pods they can carry. Some capsules are held aloft by balloons whereas others are carried around by robots, or concealed behind heavy walls that need to be destroyed. But there is a twist - although our heroes are heavily armed, their suits don't come equipped with any propulsion system. Instead, they must use their gun's recoil to move around the screen and defy gravity. Interestingly, the gun also consumes energy, and the whole objective of the game is to walk a thin line between collecting energy and running out of it. Various flying and crawling enemies are also scattered around each level, and colliding with them consumes some of the precious energy as well. The energy level is kept from one stage to the next, and avoiding wasting energy in early stages is critical to complete the game. Astro Robo Sasa also features a two simultaneous player option that can be enjoyed in cooperative, or in a more intense versus form (depending on how the players want to play the game).