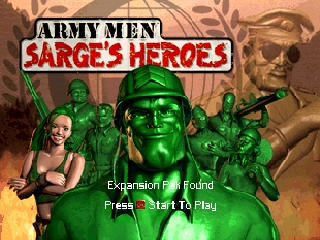 Miniature army men have littered American lawns for decades. Their battlefields have evolved from hardwood floors to shag carpeting to linoleum over the years, but the soldiers have always been frozen in injection-molded poses of warfare. 3DO is changing all of that by releasing hundreds of little multi-colored army men to wage their war on Nintendo 64.

Army Men: Sarge's Heroes is a third-person perspective shooter based on the age-old struggle between two mortal enemies: green and tan army men. You control Sarge, a squad leader in the green army. Other soldiers in your command include Scorch, a disturbed flamethrower man; Hoover, a hesitant minesweeper; Shrap, the main mortar dude; and a slacker surfer who failed to dodge the draft.

The evil tan army is led by Plastro, who has found a series of portals which connect the world of plastic army men with the planet Earth. Our world is packed full of advanced technology which Plasto can use to destroy the green army, like mammoth soldier-melting magnifying glasses. It's up to Sarge and his team to fight their way through 14 mission-based stages, wasting tan soldiers and closing portals along the way.

Military personnel take great pride in their personal appearance, even if their underwear happens to be made out of plastic. Thanks to an interesting technique that 3D0 has humorously titled "Plastosheen," each army man has a shiny coating that makes him appear convincingly man-made.

Background graphics are creative, particularly when the action takes place in the over-sized kitchens and living rooms of our dimension. Untextured tanks and helicopters initially appear incomplete, until you remember that these plastic reproductions are equally bland in real life. Light fog is used to hide occasional pop-up in the distance, but generally the visual package is tidy enough to pass any officer's inspection.

There are 13 different weapons available to your squad of army men, from grenade launchers to flame throwers. An auto-aim feature makes it easy to fires these weapons on the run, but for long-distance strikes you'll have to use the R Button to enter sniper mode. The cross-hairs move painfully slowly in this mode, so it's best to line up your target before leaving the third-person view.

The camera can be moved in and out by pressing Up on the Control Pad, but we would have preferred more advanced camera controls to assist in maneuvering the character around corners and through groups of enemies. Play control suffers a bit due to these camera issues, but there's no time to whine when there's a war to be won.

Army Men's multiplayer mode allows up to four players to pummel each other into plastic pulp. These competitions can take place in either the plastic world or the real world, but regardless of the location the last man standing wins. The same camera problems from the single-player game surface in the multiplayer mode, but fortunately the framerate does not noticeably suffer.

Anyone who has ever cracked open a bag of little green soldiers is bound to get a kick out of Army Men: Sarge's Heroes. There are quite a few nostalgic surprises along the way, and the missions are challenging enough to keep experienced gamers busy for a while.

Be warned, though: the next time you run over an army man with the lawn mower you may find yourself choking back the tears.