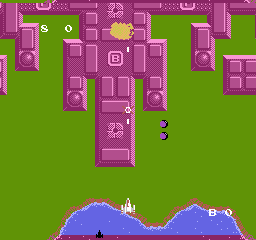 Argus is a vertical shooter by Jaleco and conversion of an arcade game originally released in 1986. The players takes control of a space-fighter equipped with a front laser gun and ground bombs. Although the game features power-ups, they follow an unusual and unique formula - tiles on the ground must be destroyed in order to upgrade the main weapon or trigger special events. However, three of these tiles must be destroyed to activate such power-ups - B creates a temporary barrier around the ship,P upgrades the primary weapon and L gives the player an extra bonus at the end of each stage. Another interesting twist to the game is the Uoru armor; a shadow sometimes appear on the ground and if the player aligns his own shadow with it, then the ship transforms into a powerful robot for a short amount of time. Each stage ends with the same boss battle; a large Mega Argus fortress with a slow flashing core at its center, and the only way to destroy this pernicious mothership is to bomb its core when it is fully exposed. After the boss is taken care of, the player must successfully land on a runway and be cautious not to crash the ship. Argus features nine levels and includes a two-player alternating option.