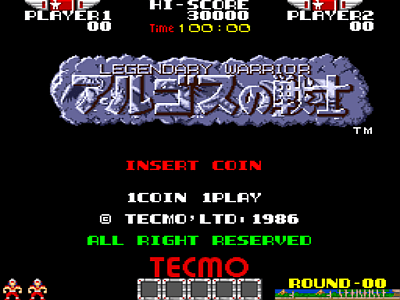 Argos no Senshi is a horizontally-scrolling hack 'n' slash game set 4.5 billion years after the Earth’s creation, in which the player takes on the role of the Legendary Warrior, a previously dead warrior who has risen from the grave to try to defeat King Ligar, an evil villain who has taken over the land of Argos.

The hero's weapon is the Diskarmor; a spinning blade on the end of a chain. When using Diskarmor, the player has two types of attack available: a left or right 'fling' attack or a circular motion attack. The latter attack is activated by pressing the attack button and UP on the joystick and is useful for attacking flying enemies or enemies positioned above the hero.

As well as the performance ratings, the temple areas also offer a clue to the next round. An example of this can be seen at the end of round 01; above the temple area is clue suggesting that players will find at least one Screen Bomb in Round 02.

As well as the five power icons, other artifacts can also be found hidden inside stones, trees, the ground and other objects. To find these items players must either shoot them or jump at a specific location to reveal them. The items include:
* Repulse Stone: These are either shot out of lava pits or hidden inside stones. They add to the player's repulse bonus, which increases based on the number of enemies killed.
* Small Gem: Found inside any object and worth 500 points
* Large Gem: Found inside any object but only after the player has collected four of the five power-ups and is worth 1,000 points.

Unlike many games in the genre, Argos no Senshi has no end-of-level boss fights. After successfully completing each of the game's 27 rounds, the hero will visit a temple area to have their performance rated and, if they were good enough, earn a promotion in rank.

As well as the performance ratings, the temple areas also offer small clues to the next round. An example of this can be seen at the end of round 01; above the temple area is clue suggesting that players will find at least one Screen Bomb in Round 02.

Argos no Senshi was released in May 1986 in Japan.

The title of this game translates from Japanese as 'Warrior of Argus - Legendary Warrior'.

* Rank bonus : it's based purely on the number of kills you've made in total per rank, regardless of dying. After you get promotion count the number of kills from zero again. As you can see the stripes start off pretty inconsistent but end up just being another stripe per 50 kills. If you kill an enemy with the Cross power's force field (i.e. you run into it, not shoot it) you get the points but nothing counts towards your rank. If you die and continue you keep your rank, but not your score. However, I have just found out that if you set the bonus lives to any other values other than the default 50k/200k/500k the amount of baddies you need to kill is effectively doubled.

7) BEST rank :
Score awarded in temple : 30.000 points
Once you get the 'BEST' rank, your rank is actually still increasing by 1 stripe/1000 points for every 50 kills. For some reason the programmers decided to continue the ranking system but not to include any more graphics. But, if you get it to 64,000 the next bonus goes back to 1000 points!!! On the high score table the rank badge loops around and displays the first rank onwards. I would have thought that they'd have changed the colour of the wings or something. It looks very strange to finish the game with 4.000.000 points and have the first rank!

* Defeating the Dominator: the Dominator is surprisingly easy to kill. When you enter the final chamber run straight to the right hand side of the room and the Dominator will roar and jump right over you. You can then turn and shoot at him. When he attempts to jump on you, run straight under him and shoot him again. Basically you just repeat this pattern until he dies, which is only after a couple of hits if you have the Crown power. The Dominator is worth 22k when killed and he can be killed instantly with the Tiger power but you aren't awarded a 50k bonus.

* 2nd 10,000 Bonus : there's a 10k bonus available from the 4 creatures that stand on each others shoulders. You must kill all 4 of them before they touch the ground. There's several ways to do this but the easiest way is with the Crown and Sun powers. Simply stand at the bottom of the stack and shoot straight up! On round 17 these creatures are unlimited and form a new stack every few seconds. Staying back on that round after a time-out might even net you as much as an extra 100k if you can dodge Death for long enough! I have seen players use this trick to get over half a million on that round alone simply by staying back for long periods of time and using up their lives.

* 50,000 Bonus : this one is scored from any of the large blue demons that appear at the end of every 4th round and also there's two on the final round. You need the Tiger power for this, just jump on his head and kill him for an easy 50k! There's eight in the game so that's a luscious 400,000 points for the lot!

* 2nd 70.000 Bonus : the Star Tree. In the middle of round 13 there is a tree where if you shoot at it in various places stars will appear. Every star you reveal counts as one collected. So in other words you can reveal all the stars and get 70k and then collect them to get a total of 140,000 points. Some of the stars are in bad positions so you'll have to bounce off a falling warrior to collect them or wait for Death and bounce off him. This part of the round is also where the parchment is (see below).

* 160.000 Bonus : this is received by collecting all 5 of the special powers. The bad thing is it can only be gained once per life.

* 1.000.000 Bonus : on round 13 there's a hidden parchment which is worth 1.000.000 points! It's located in-between the same area as the famous Star Tree and the next house. The place to shoot at is at the left side of the house just below the title Time. When you shoot nothing will happen except make a sound like you're hitting something. After about 12 hits (about 4 or 5 with the Crown and Sun powers) a red parchment will fall down which is worth 1.000.000 points when collected. Grab it quick because it vanishes after only a few seconds!