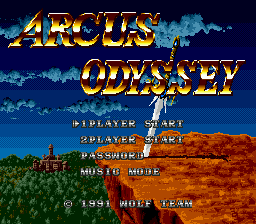 In Arcus Odyssey, the player takes on the role of one of four different characters, and proceeds through each level in order. The players may move, attack, defend using a projectile-blocking shield, and use a variety of offensive, defensive, and recovery items and magic, all of which can be found in chests scattered throughout the levels. Some levels require the players to accomplish sub-quests in order to proceed, such as extinguishing a fire blocking the door to the next level; other levels give the player an ally.

The game primarily has an isometric view, although the player's characters can move freely in eight directions. After defeating most bosses, players receive a power boost; this boost either gives them more health or more power.