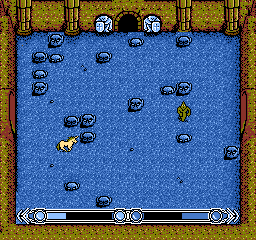 There's a board. There are pieces with varying powers, squares to move into and an opponent to conquer. But the squares keep changing. And once you decide where to attack, the board explodes into a battlefield. Your pieces include phoenixes, golems and wizards, and they use all their strange powers when they fight the banshees, goblins and sorceresses they face. They cast spells and missiles, they pummel, pierce and throw out flames, they move each other around, take on each other's shapes and shriek at each other. If you square off on a spot that stays favorable, you'll be hard to kill. If you're smart, fast, dexterous and farsighted, you may win. If you're not, look for another game.