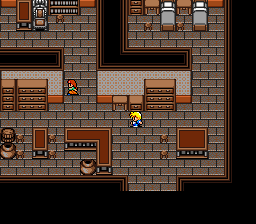 Aqutallion is a little known Role Playing Game by Tecmo. The game tells the story of Ray, a young and adventurous teenager who lives with his mother on a tiny island. Years ago, Ray's father was mysteriously killed and her mother raised the poor boy after the tragedy. One day, our hero discovers that something terrible is about to happen. An evil demon called Homncruse is poised to take over the World and only Ray and his friends can do something about it. He sets out on a journey to find five companions and the guardians who will eventually help him in his quest. The most interesting feature of the game is how the player controls two teams of heroes - the Aqutallions and the Kustera. Each party has special abilities and needs to be used in conjunction with one another for the most benefit. Aqutallion also cleverly mixes fantasy and technology and villains often rely on machines to fulfill their evil intentions. Beyond that, Aqutallion is a traditional Role Playing Game - our heroes travel the world, visit towns, villages, dungeons and gather clues. Combats are turned-based and are randomly triggered throughout the game, and their sole purpose is to gain experience points and to level up. Magic has also its place in the game and the player can combine spells to trigger more powerful combo-attacks.