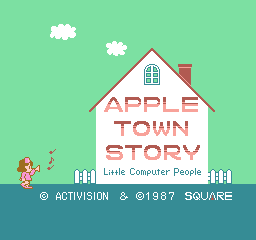 Some players may have heard about Activision's unusual game Little Computer People released back in 1985. Apple Town Story is somehow the Japanese version and was released by Square. The man avatar from the original game was replaced here by a cute little girl and her ginger cat. The concept of the game is rather simple - the screen shows a slide-view of the inside of a three-story house. The bedroom is on the top floor and the game starts there and like every morning, the little girl wakes up at 7:00 am. 'Game' is a big word here as most of the player's time is spent watching the little girl and her pet's actions. She will probably wash her teeth, watch some TV, eat breakfast, write a letter and so on. However, it is possible to interact with her in limited ways and she will get really bored if the player doesn't. He can give her a call, send her a letter, feed her ginger kitty with pet food, or even give her a Famicom game to play. The view also zooms in for special occasions, like when she plays piano, turn some music on and dance or play cards. 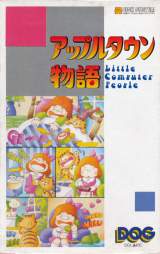