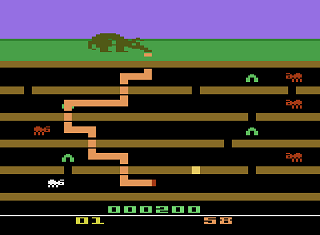 Port of the Stern coin-op of the same name, Anteater is an action game in which you must guide an anteater's tongue through a underground maze trying to eat all the larva while avoiding other deadly insects. Although the well-known arcade/pinball company Stern was the developer of the game, it was actually distributed in the US by little known Tago Electronics.

Even though this game stars an anteater, you really only control his tongue as you weave it around the maze. Unfortunately for you only the tip of your tongue is deadly to insects, so you need to watch out and make sure nothing comes into contact with the rest of your tongue. Although your tongue is quite flexible, you unable backtrack over it once start down a tunnel. However you can retract your tongue quickly in case of an emergency, by pressing the fire button. Although you might think you need to eat all the ants to win the game, the goal is actually to clear all the larva in the maze before time runs out. The larva appear as squares in between each layer of the maze unlike the Pac-Man style pellets that lined the tunnels of the arcade game. It's unknown why this change was made, but it may have been due to the technical limits of the 2600.

However this doesn't mean you can ignore the ants, as the ants will bite the sides of your tongue costing you a life if you're not careful. Ants can be safely eaten with the tip of your tongue. In addition to ants, you have to deal with worms and queen ants. The worm slowly marches back and forth on each layer and is deadly if eaten from the front. However you can safely nab him from behind for extra points and he has no effect on the sides of your tongue. The queen ant on the other hand are located deep within the anthill so catching one is no easy task, but if you do manage to snag her she will clear all the enemies from the screen for a short time so she is well worth seeking out. Also take note that you have a limited amount of time to complete each level. Once day turns completely to night you'll lose a life.