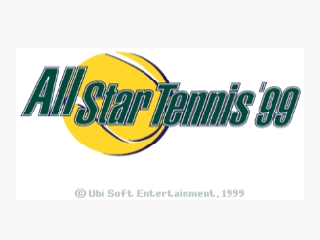 This Pak generally plays like a sim, although 120 mph serves and an option to litter the court with Wiley Coyote-ish bombs certainly liven things up. There are three difficulty levels and plenty of realistic grunts from the athletes, Oohs from the crowd and Quiet please exhortations from the line judge - who, incidentally, never makes a bad call.

There are also four fictional players, including two women sporting microminiskirts that would make Ally McBeal blush. All players will have six basic shots, including slams, lobs and drop shots, and each will have two special shots, such as Michael Chang's vicious two-handed backhand.

The bodies are nicely proportioned, but greater detail would have been nice. With no more than four characters appearing simultaneously, it's not as if the mighty N64 CPU has to push tons of polygons around the screen. The motion-capture moves are generally smooth.

Although publisher Ubi Soft did not secure licenses for actual tournaments, the UK's grass court is clearly modeled on Wimbledon. In fanciful contrast, the hard Greek court looks like it's nestled in the ruins of an ancient theater.

The players are evenly balanced, so pitting a woman against a man makes for a competitive match. Besides exhibition matches, All Star Tennis will allow as many as eight players to compete in a singles tournament.

Bomb Tennis drops a short-fused bomb wherever the ball hits. If an athlete runs across it or stands nearby when it goes off - boom! Despite the zany props, Bomb Tennis is a lot less arcade-like than you might think. The athletes' skills are unchanged, so the tactics shift subtly to avoiding certain parts of the court while trying to coax your rival towards bombs your shots have left.