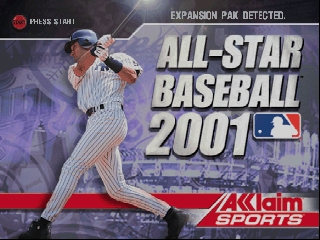 With last year's N64 diamond contenders EA Sports, Nintendo and Konami sitting out this season, cynics might expect Acclaim to trot out a tired retread of its venerable sim.

Instead, the company took the risky move of farming out coding chores to Chicago's High Voltage Software, best know to N64 fans for kiddie-car Pak Lego Racers N64. While this year's version boasts no earth-shaking innovations, it's a muscular Pak that should amply satisfy your baseball jones.

Right from the get-go, ASB 2001 lets you play with recent Cooperstown Legends such as Joe Morgan, Nolan Ryan and Whitey Ford. Despite an oddball default lineup (sluggin' Willie Stargell batting third?), it's a fun team. Our only beef is with the hackneyed Field of Dreams ballyard in the middle of a cornfield. It would have been far cooler (and pretty cheap, probably) to pick up the rights to a genuine ballpark of yore, like New York Giants' Polo Grounds.

Back to the present: rosters were set quite late, so Ken Griffey Jr. is a Red. However, Kent Bottenfield is still the Cardinal's number one starter.

In a move calculated to appeal to Slugfest fans, High Voltage has added an Arcade Quickplay mode that strips out the fancy-schmansy cursor graphics for both pitching and batting.

Instead, moundsmen heave the ball plateward and batters whack indiscriminately, generally resulting in a yard job or at least a long drive. Deft use of Pitcher Aftertouch, which allows you to control a pitch in-flight, can the damage to, oh, about four or five runs an inning.

Fortunately, both Arcade Quickplay and plain-old Quickplay let you pick a team, something you couldn't do in last year's Quickplay.

For players used to free-swinging rival games, ASB's batting options ? contact vs. power swing, the ability to guess a pitch and direct the ball ? can be daunting. Imitation being the sincerest form of game development, High Voltage has added a Batting Practice mode inspired by Konami's Bottom of the 9th. An inside forkball from a submarining southpaw is but one of the choices you can specify in this mode's exhaustive configuration menu.

Loathers of interleague play will be happy that ASB 2001 gives you an option for playing a full season within your own league. You can also play a season as short as 13 games, with each game lasting a scant one inning. You can also skip the preliminaries and go right to a postseason that starts with the Division Series, League Championship Series or World Series.

ASB's extensive general manager options for trading, calling up minor leaguers and claiming free agents will especially come in handy if you've green-lighted spring training, injuries and ejections. Like a dedicated letter carrier, you can play in the snow or rain and at day, dusk or night. High Voltage has even tossed in an abbreviated version of baseball's official rules.

It's an Acclaim sports game, so no one should be surprised that menus tilt heavily to the complex side. Kudos to the publisher for promoting literacy among America's youth with a highly detailed manual.