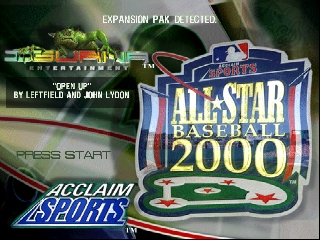 The Windows 95 of sports games, Acclaim couples great strengths with an interface that might drive you batty.

You can learn the basics of baseball in an afternoon, then spend a lifetime mastering its intricacies. All-Star Baseball 2000 isn't quite so daunting, but expect to log lots of time on the Pause screens while you figure it out.

Created by Iguana, ASB 2000 has the glossy graphics and excellent sound engineering you'd expect from the team that brought you All-Star Baseball '99, NFL Quarterback Club 99 and Turok 2. ASB 2000 supports hi-res graphics without the Expansion Pak. If you pop in an Expansion Pak, though, you'll witness extra-long replays.

You'll be able to play the official 1999 MLB schedule or a 162-game season without interleague play. For extra tension, ASB 2000 offers a two-week pennant chase and games lasting as little as one inning. Playoffs can last for three rounds, two rounds or simply the World Series.

Before a game, season or playoffs begin, you choose between simulation or arcade pitching modes. The only difference is that each pitcher's repertoire expands from four to eight pitches in arcade mode. As you'll see, there's nothing quite like a Randy Johnson screwball to flummox a batter.

If you'd just as soon dispense with formalities, ASB 2000's Quickplay option launches you into a single game between two randomly selected rivals. One major annoyance: Iguana compiled exhaustive scouting reports, then hid them so you can't access them during a game.

As you'd expect from an Iguana offering, ASB 2000 bristles with nice visual touches. Each player has his unique size and facial appearance. Jumbotrons replicate the on-field action and the fictional ads bedecking the stadiums show cheeky humor (our favorite: the Astrodome's "Hogan's Gyros"). Wind influences game play, but weather conditions, which range from sunshine to snow, do not.

More to the dramatic point is the fine use of 1,500 play-by-play and color calls by Yankee radio announcers Michael Kay and John Sterling. Even confirmed Yankee haters will find the duo's acerbic observations ("He got the exact pitch he wanted, and he ab-so-lutely destroyed it!") a refreshing change from the blah commentary of many baseball games. To heighten that you-are-there feeling, Iguana has also captured actual ballpark sounds and even rolls the Canadian national anthem for games in Montreal and Toronto.

Topping ASB 2000's impressive feature-list is an awesome batting engine. The Control Stick gives you precise analog control over whether you want to push or pull and undercut or overcut the pitch. Stay away from the temptation to try to go yard with every pitch, especially if a stiff wind is blowing in.

You can bunt by pressing the Down C button, bunt harder by holding down the button, and direct your bunt with the Control Stick. An optional pitch icon makes it easier to see where the ball is coming.

A hot/cold zone chart displays how well your batter handles pitches in different parts of the strike zone. If a player is on hot streak or a slump, the chart can change from one at-bat to the next. Numbered dots indicate the pitch sequence and location and when the batter swung at a pitch. Helped by the chart, you can improve your chances of getting a hit by guessing the pitch and location.

The swing animations are far more graceful than last year's gawky affairs. Judging from the way batters wiggle their bats and butts, you'd think downing a gallon of Jolt cola was a mandatory part of major league pregame meals. Big-league batters usually swing close to the ball, but ASB 2000's CPU-controlled hitters display an alarming tendency to miss the ball by a country mile.

Mercifully, the developers spared us the corny histrionics (e.g. players hollering at the ump) that mar other games. Batters occasionally whack the plate in frustration after taking a called third strike, but hey, wouldn't you?

Keep 'em guessing or you'll get creamed. Use the hot/cold charts when locating your pitch, but be sure to move your pitches in and out and up and down and to alternate fastballs, off-speed stuff and breaking balls.

You can reposition fielders in any of seven infield or nine outfield defensive setups and, in clutch situations, you'll probably want to do just that before every pitch. While CPU-controlled fielders usually make the right play, the dopey first basemen will run to the sack with ground balls, even if a runner on first is only halfway to second. Outfielders appear blessed with a superhuman ability to force runners.

Iguana has done an admirable job of sprucing up the fielding animations this year. While collision detection between players is shaky at best, you'll be impressed by the over-the-shoulder and shoestring catches.

ASB 2000 offers three camera views for batted balls, but the default medium-range view does the best job of compensating for the finicky fielder control. The handy Fielder Assist option points your fielder in the right direction. A comet-like streak makes it very easy to track balls rocketing off the bat.

Smartened-up AI means players will follow real-life tendencies for streaks, slumps and errors. Players will perform differently at home or away, at night or in the day, and on grass or artificial turf.

The maddening interface, especially in the General Manager options, may have you gritting your teeth. Once you get over the steep learning curve, though, ASB 2000 is as deep -- and good-looking -- as any sports Pak out there. You'll definitely want to read the instruction manual.