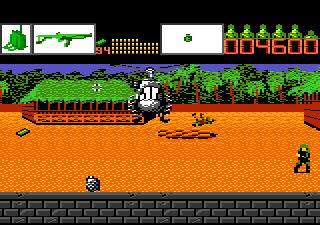 Alien Brigade is an exciting arcade-style action shooter. You destroy alien invaders in five different scenarios. Each scenario is progressively more difficult as the aliens increase in population, strength, and firepower. You gain points by destroying the aliens and successfully completing each scenario's unique objective. You lose points if you shoot innocent bystanders or hostages, so you must aim with care!

In each scenario of Alien Brigade, aliens, soldiers and civilians move from right to left across your screen. Aim your light gun or position the target sight with your controller and fire to blast the ugly, hunchbacked aliens and aliens disguised as human soldiers or civilians. (Aliens in human form move more slowly than normal humans. You also earn points for destroying tanks, helicopters, and other enemy vehicles. Vehicles explode and living targets fall to the ground when hit.

The transceiver box in the far left section of the Status bar flashes to alert you of an incoming communication. You can use your transceiver to communicate with your commanding officer and receive your mission objective at the beginning of each scenario.

At the beginning of the game you receive a single shot, semi-automatic pistol, a five-burst automatic machine gun, one hundred 48-round clips of ammunition, eight grenades, and six extra lives. In every scenario you can find more powerful weapons, ammunition, grenades, and canisters of military food rations to increase your health rating. The weapons may be hidden, so search the area by shooting at small objects to reveal items hidden beneath them.

Each scenario of Alien Brigade ends when you successfully complete the scenario's objective. The game ends with a final battle in the alien's main camp where your mission is to destroy all the aliens, the alien base, and the egg-laying alien queen.