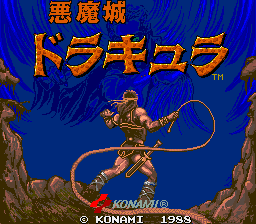 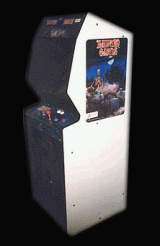 Akumajou Dracula was released in February 1988. It is known in US as "Haunted Castle [Model GX768]".

The title of this game translates from Japanese as 'Demon Castle Dracula'.

Akumajou Dracula IS part of the "CastleVania" games series. However, as many games of this series, it is not part of the main storyline. The main character doesn't have any name, but it is believed to be Simon Belmont of the original "CastleVania".

* Combinding Credits : If you've ever played Akumajou Dracula, then you know that you are only allowed 3 continues throughout the game. And since you only get One Life per credit, it makes for a hard game. But if you have four credits in the game and hit the player one start button four times you will combined all four credits together giving you a huge life bar. Making this game a lot easier to play. Only trouble is, if you die, it will be game over because you will have used up all 3 of your continues making your Life Bar bigger.