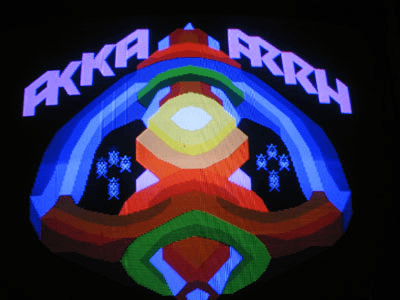 The game itself is a spaceship game controlled with a trackball. Your spaceship sits in the center of the screen and you control a cursor which represents the ships weapon systems. The most interesting thing about this game was the fact that it has a zoom button which allows you to zoom in on the area closest to the ship. 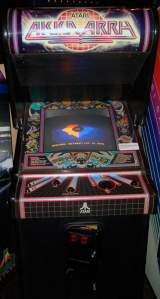 Click to enlarge
(members only)
Atari went all out designing the dedicated cabinet for this title. Most prototypes just use leftover cabinets from other games, and tend to have hand drawn artwork. But Akka Arrh was not like most games. Akka Arrh used a totally unique cabinet that had a strange tubular marquee, and a bunch of chase lights ringing the monitor area. The game's sideart, marquee and other artwork were of the same high quality as Atari's normal production games. But, since it didn't do well in location testing, so all that work went to waste, and the game never went into wide production.

The name Akka Arrh is an an pseudo acronym for : Also Known As Another Ralston Hally production. It was named after the programmers Dave Ralston and Mike Hally.

Only 2 units are known to exist.

Akka Arrh was originally called "Target Outpost". It was market tested in 1982, but was deemed too complicated for the average player.

The default high score screen of "Cyberball 2072" features names of many Atari arcade games, including 'AKKAARRH'.