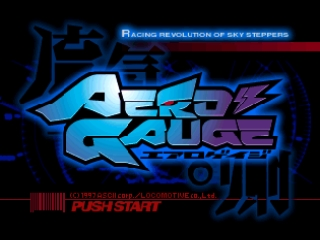 The developers jettisoned power-ups and other namby-pamby stuff, instead concentrating on one thing: speed. Except for the forgiving Canyon Rush track, the three tracks available at game's start twist and turn like a preschooler's shoelaces. Mastering them requires jack-rabbit starts, pinpoint cornering and an extreme reluctance to ever hit the brakes.

AeroGauge's five vehicles are each rated for five characteristics: speed, acceleration, steering, shield and stability. Shields protect you from nasty meetings with walls, which happens quite a bit, especially in the tortuous China Town track. Fortunately, each track has a Redemption area. As you fly through it, a green haze covers your shields, indicating that they are being repaired.

A novel feature has you winning the keys to five additional vehicles by finishing a track in a time ending in 64 (as in 2 minutes 19.64 seconds). One of the top hidden performers looks like a giant N64 Controller! Each race lasts three laps, except for the lengthy Neo Arena track, which lasts two. Champion drivers can enter two additional tracks.

Once a race begins, you'll find that you gain speed by flying as high as possible. The high way also allows you to avoid ground-hugging obstacles. The biggest challenge comes from threading the tubes that twist through every track except China Town. You can bounce your way through a tube, but you'll damage your shields and lose valuable time. It's best to cleanly enter and exit a tube in the middle. Once inside, try to hug the orange-and-black arrows on the tube's wall.

Play control is responsive, yet conveys the soft, cushioned feeling you' d expect of a hovercraft. AeroGauge offers three Controller configurations. Like most other N64 race games, default has the Control Stick steer, the A Button accelerate and the B Button brake. The Z Button's drift capability allows you to cut sharp corners, but dramatically slows you down.

Single player modes include Grand Prix, One Match and Time Attack. In Grand Prix, you must post a qualifying time on the Canyon Rush track before racing seven other chariots on a four-track circuit. One Match pits you against seven vehicles in a single race. Time Attack offers an infinite lap option. Your best time can be saved as a ghost to a Controller Pak.

Two-player Vs. Mode allows you to pick any track you want. For all intents and purposes, the split-screen frame-rate is as good as it is in a single-player mode.