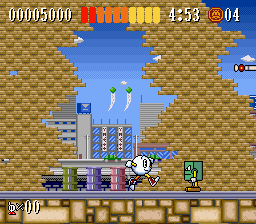 The player takes control of a white Pachio and tries to make his way through all the side-scrolling levels. In between each level is a cut scene that updates the story for the player. Players can collect coins in the game; collecting 100 of them results in an extra life. They are also given a life bar with three different colors (symbolizing how 'healthy' the character is), a time limit, and a relatively generic score indicator that goes up to 99 million points.

Released on April 9, 1993 in Japan. It was never published outside Japan.