Far away from here, in a hidden gorge through the Mountain of the Golden Lion, lies the forgotten ABYSS. Forgotten, that is, until now - when brave and sometimes foolhardy adventures strive to cross it. You are one of this elite band whose sole aim is to destroy the many evil monsters that lurk in the shadows, waiting for the next meal to come strolling across one of the many bridges in the ABYSS.

ABYSS is an unusual adventure game. It requires the player to undertake a succession of mental tests, aptitude tests and arcade games. To achieve your goal, which is to get to the end of the trail, you must complete every test correctly. The tests are randomised as to type and difficulty. The player can be lucky and have a succession of the easier tests. However, to achieve his goal, he will have to prove his intellectual prowess and be able to get the more difficult tests correct as well.

After each test, you return to the matrix and proceed to the next stage. To reach the next step you have to cross over rickety bridges. If you are unlucky the bridge will fail and you will be plunged into the ABYSS - never to be seen again!

The game is for one player. However, it may be played by two or three players alternatively, each competing to see how far down the trail they can get before being pitched into the ABYSS!

The rules are simple, the tests are not! 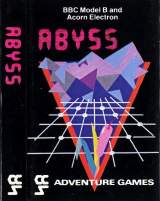