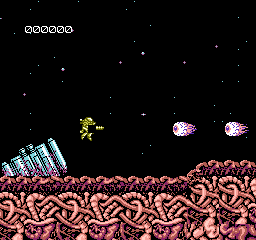 Abadox is a multi-directional shoot them up by Natsume. In the year 5012, a massive life form the size of a small-planet stalks through space looking for its next victim. The 'Parasitis', as it is called, is now heading towards planet Abadox and lieutenant Nazal is sent on a desperate mission to intercept it. Nazal must enter the humongous Parasitis's body and destroy it from the inside. Incidentaly, the planet-size invader also swallowed a medical ship on its way to Abadox, and this very ship was carrying an important passenger - Maria, the princess of Abadox - and it is believed that she is still alive so a rescue could not be ruled out. Although Nazal starts his mission with a limited firepower, items left behind by blue creatures dramatically increase his chances of success. Four different weapons are available throughout the game, namely the Three-Way Beam, the Five-Way Star Beam, the piercing Laser Gun and the Pandora Ring Gun. Additional items and special abilities can also be collected along the way, such as Speed Ups (speed boosts are actually accumulative), Barrier Shields (orbs that rotate around Nazal and protect him against enemy attacks - up to four can be activated at once), Twin Missiles (from straigth twin-missiles to homing missiles) and Power Shield (two levels of protection, green and red). Abadox consists of six main areas (all divided into two sub-stages) and is single-player only.

Cheat Mode (level select, invincibility & all-weapons mode):
There is an interesting cheat mode in Abadox that is activated using various codes.
At the title screen, press A, A, Up, B, B, Down, A, B and one of the following codes:

Then press Start to start the game. Additionally, you can pause the game at anytime to activate the invincibility and all-weapons mode once the main cheat code has been entered.