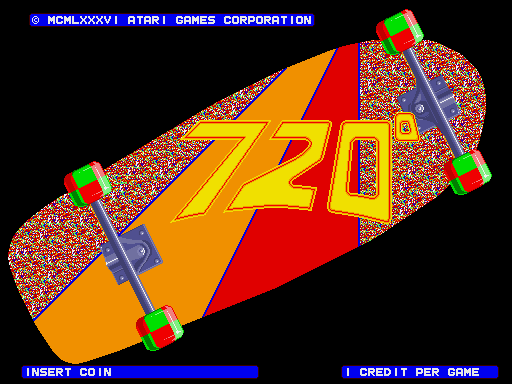 720° is a one or two-player arcade game with players taking on the role of a skateboarder, and must perform various tricks and maneuvers to earn the points and tickets needed to compete for medals in the game's numerous skate parks.

The bulk of the action takes place in a 'Skate City', a small urban area made up of ramps, jumps and hazards. Players can skate anywhere they wish as they perform the tricks and jumps needed to reach the score thresholds that will earn them entry tickets to Skate City's skate parks to compete for medals and cash prizes.

Each score threshold must be reached and a park entered within a tight time limit. Failure to do so sees the skater persued by a swarm of bees and the words SKATE OR DIE appear. Should the bees touch the skater before he enters a park, the game ends. Skate City's roads and pavements are populated with moving traffic and pedestrians and any collision with them will result in the skater being knocked from his board, costing the player precious seconds.

The parks themselves each feature one of four different disciplines: Slalom, Jump, Downhill and Ramp. Each park has a timer and players can earn either a bronze, silver or gold medal - together with a cash prize - depending on how quickly the park is completed. If the park target score or finish line is not reached before the timer expires, no medal or money is awarded.

Money won can be used to buy equipment upgrades from the stalls that litter Skate City. Players can buy upgraded boards, helmets, pads and shoes. Boards give faster speed; helmets allow for more risky maneuvers; pads give a faster recovery from falls and shoes provide more height on jumps, as well as giving a quicker standing start.

At the start of each new game, players can select from one of two play modes. 'Training Level' is available for beginners and gives players numerous playing hints and tips. 'Experienced Level' is more challenging as well as offering fewer hints. It does, however, include the 'add-a-coin' feature, which allows for awards and items already won to be carried over to a new game.

The main objective is to compete in as many skate parks as possible. There are numerous city hazards to be avoided, such as BMX riders, cars, Frisbee throwers and other skaters. To guide the player around Skate City are map tiles. Riding over one of these will temporaily pause the action and display the layout of the city, including the locations of the skate parks and equipment stalls.

720° features ten 'class levels' which determine the degree of difficulty in the skate parks and the timer in the city streets. Each of the four skate parks is graded in difficulty, ranging from 1 (easiest) to 4 (hardest).

By using the add-a-coin option available in the 'Advanced' game mode, players can keep any special skate equipment they have acquired in the previous game, as well as all accumulated cash, tickets, points and medals.

720° has all the thrills and skills of real skateboarding with both freestyle and competitive action. A totally unique game format challenges players to become champion of the skating world.

* Start by skating to a skatepark to select difficulty.
* Perform skate maneuvers in the city to earn tickets to get into a skatepark.
* The "Ramp" is one of over 20 skateparks.

By definition, a 720° is one of the most daring moves attempted only by the best, where the skater does a full 720-degree twist while soaring through the air. In 720°, the game, players can attempt to perform this move without bodily injury. This is only part of the fantasy world of 720°...

* Unique Action and Game Format.
The player portrays the skater who must earn the right to compete in the skateparks of the city and ultimately win the title of champion of the skating world. The action starts with the player in the middel of "Skate City", where all surfaces are skateable - a skateboarder's dream world! The player earns tickets by performing skillful skate maneuvers in the city.

These tickets allow him to enter the skateparks where he competes against the clock fot gold, silver or bronze medals. "Cash" prizes are awarded to the skater if he qualifies for a medal. After the skatepark competition, the game continues back in the city for more freestyle action. Numerous hazards and obstacles create a busy scenario in the city, and the skater has a limited time to get to another skatepark.

Players can use their "cash" winnings to buy skating equipment from various skate shops though-out the city.
- BOARDS will give the player faster speed.
- HELMETs allow more risk-taking for successful maneuvers.
- PADS give faster recovery from falls.
- SHOES provide better height on jumps and quicker starts.

* New Controls
Players controls consist of a rotary controller which allows full circular and directional movement. A kick button keeps the player skating, and a jump button is used to "catch air" for higher points. Anything goes in this game, as players learn to make incredible skate maneuvers.

* More Visual and Audio Entertainment.
720° has a new 25" higher-resolution monitor for better graphics and animation than ever before. Plus, 8" speakers highlight the custom music, sound effects and speech, making the player feel like he's tight there in the action.

* Special Game Features
- In 720° players create their own game action as they select where they want to skate. PLayers will find map areas in the city which will momentarily display the layout of the city and the skatepark locations.
- Players can select the class level in which they want to compete. At the start of each game, players skate towards one of four skateparks which very in difficulty from "novice" to "pro". As the game progresses players automatically advance to the next level.
- Players can compete on over 20 skateparks, each requires a different skill. There are variations of a half-pipe ramp, a downhill, a slalom and a jump park.
- The city is filled with hazards which the player must avoid, including: street traffic, BMX bikers, skater gangs, and frisbee throwers/
- An Add-a-Coin feature lets players stay in the action and keep any special skate equipment acquired. 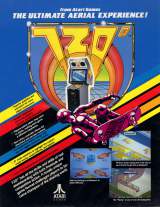