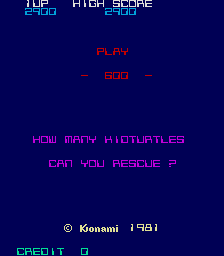 Other times, beetles will come out of the boxes, which the player will have to quickly run away from. The player's only offensive move is the ability to drop "smart bombs" to temporarily stun the beetles. The player's smart bombs can be refilled by grabbing the smart bombs in the middle of the maze. However, unlike actual smart bombs, the player's bombs do not move and stay in a single place until a beetle runs over it.

You have eight floors to deal with the beetles, then you'll go to the roof to get your baby turtles, after you go get them, you walk home with the rest of the baby turtles you collected. The game pattern is endless.