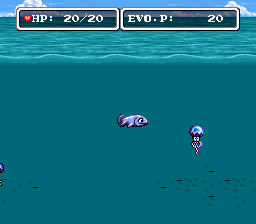 46 Okunen Monogatari is a side-scrolling action/RPG by Almanic Corporation and published by Enix. The goal of the game is to ensure that the primitive animals on Earth evolve and thrive. Each one of the various stages gives the player an evolutionary challenge to fulfill. The player's journey starts in the sea as a simple fish and his first task is to defeat the sharks before moving onto land. There, he soon prevents the sleek insects to take over the reptiles and the same reptiles to take over the mammals. The player's avatar, with the help of the beautiful Gaia (The Earth spirit), evolves into different creatures and eventually reaches the ultimate human form in the Age of Eden. Each incarnated creature wins evolutionary points (AP) by eating other life forms. The precious earned points can then be used to modify parts of the creature's body such as jaws, horns, neck, body, hands, feet, tails and so forth. Magic crystals can also be collected along the way to accelerate the evolution process. The game is first presented as an overhead view of the surrounding world and once a stage is selected, the whole gameplay turns into a traditional side view action game. Other animals are scattered along the way and either give the player information, short missions or, in most cases, simply try to eat him. The game is non-linear and it is up to the player to evolve an aggressive or more defensive creature. These choices are at the core of the gameplay and the game branches out depending on the player's actions. Interestingly, a collection of creatures can be stored on the game's cartridge.