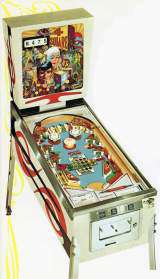 All rollovers and targets score 50 points. During the game, certain sets of targets and rollovers may be increased in value to score 200 points instead of 50 points, as explained below.

At the start of a game, all sequence indicator lights are out and all target and rollover indicator lights are lit. The basic idea of the game is to complete as many sequences as possible (starting with the first sequence) by hitting the 1, 2, 3 and 4 targets or rollovers. When any lit target or rollover is made, the indicators of all like-numbered items go out and the corresponding number is spotted (lit) in the row of the first sequence. Numbers can be made in any order. When all four numbers in the first sequence are made, 500 points are scored and all targets and rollovers reset, lighting up again. This same action is repeated to complete the second, third, and fourth sequences in order, with a 500 point bonus being scored each time a sequence is completed. Once the fourth sequence is completed, the targets and rollovers do not reset - in other words, they do not light up again. However, they do continue to register their current score value.