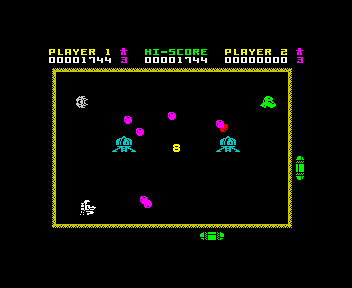 A power hungry race of aliens has invaded a neighbouring planet, but the invasion has gone drastically wrong. The aliens have decided to evacuate but have lost all their weapons and are now defenceless. As a member of the Interstellar Mercenary Organisation, you help to evacuate the aliens, protecting them as they head for their escape craft.

Your objective is to complete the game as quickly as possible without dying whilst accumulating as many points as possible. In the very centre of the screen is a number. This is the number of aliens you must 'get home' to complete the level. Aliens appear at the perimeter of the playing area very few seconds and begin to head for one of the two rescue crafts near the centre of the screen. The better you defend the aliens, the quicker you will complete the level and the bigger will be the bonus that you receive.