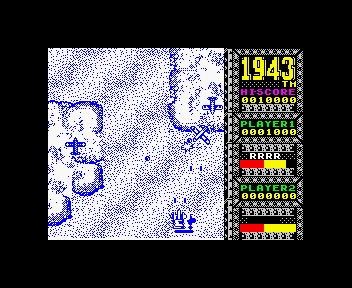 It was over 40 years ago, at the height of World War II, that the Japanese main squadron tasted defeat off the west coast of the Midway Islands. Some say that this battle greatly changed the outcome of the war, some say under different direction we may now all be living our lives under the shadow of the Rising Sun. This is your opportunity at the controls of your magnificent P38, armed with six secret weapons, to relive the titanic struggle for supremacy against the battleship Yamato and its legions of defences.

As you blast through the flak filled skies in your mission to destroy the Japanese battleship Yamato, you will need to shoot anything that stands in your way. By collecting POW symbols you collect a secret weapon enabling you to increase your firepower. The smart bomb will destroy any enemy units on screen but these are limited. Rolling enables you to roll the plane to prevent you from being destroyed.