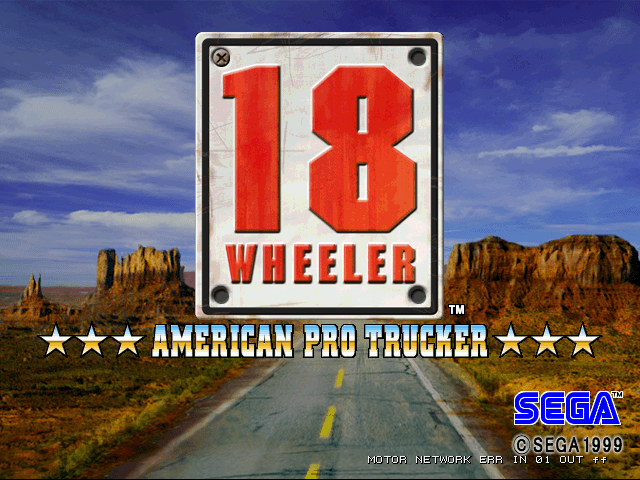 Squeeze through the traffic! Side by Side! Emergency brake! Falling cargo! Race across the wide American continent, obstructing your rival all the way!

Incredible graphics brought to you by the power of NAOMI. Real 18 Wheeler action. control sensation and traffic conditions have been accurately recreated as far as possible. Carefully and quickly deliver your cargo. Brand new, original gameplay offers fun and excitement for a wide range of players. Adds life to any location, while generating a consistently high income.

Drive your rig across America, from New York to San Francisco.
* 4 rigs to choose from, each with differing levels of speed, torque and toughness. Competing against your rival, deliver your cargo safely to your destination within the time limit. The quicker you get there, the bigger your reward.
* 4 stages in all. Clear each stage to access the bonus stage, where you can test your parking skills and earn bonus items, like the horn muffler and a new engine!
* Eye-catching cabinet design, evoking a real tough trucker feeling.
* Equipped with a real sized 48cm diameter steering wheel, to accurately convey that Big-Rig feeling.
* Experience the Raw power and noise of a 14000cc engine, with a sub-woofer and base shaker located under the seat.
* Two Person bench seat with a horn located on the passenger side - ideal for couples to enjoy!
* 50 inch monitor to convey all of the in-your-face excitement!
* 2 stage Transmission Change lever.
* Horn button 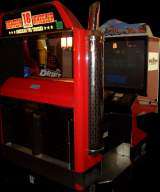 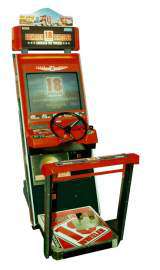 Click to enlarge
(members only)
Runs on the Sega "NAOMI" hardware.

* Travel on the regular highways. Taking into consideration the road and traffic conditions, safely and smoothly overtake. Use caution! The heavier your cargo is, the slower your acceleration and braking.

* Press the horn button located in the centre of the steering wheel and in front of the passenger seat to clear slow moving traffic off the road!

* Hit the cars to get a three second Time Bonus.

* Drive behind other large trucks to enter their slipstream, increasing your trucks acceleration and top-speed. (Slip-Stream) will be displayed on the screen.