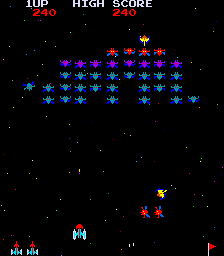 Galaxian is a legendary single-screen shoot-em-up that took everything that made Taito's ground-breaking "Space Invaders" so good, and improved upon it on every level. Each screen starts with a wave of multi-colored aliens moving left and right at the top of the screen; the aliens quickly break ranks and start dive-bombing the Galaxip (player's ship) - either in single units or in groups of 3 - dropping multiple missiles as they descend. All of the aliens need to be destroyed before the player can progress to the next wave.

Galaxip : This is the name of the ship which you control at the bottom of the screen.

Galaxian : These attacking aliens come in three varieties: blue, purple, and red. They begin in formation at the top of the screen and will occasionally swoop down to attack you before returning to their position in the formation.

Flagship : At least two of these appear at the top of the formation at the start of each stage. They will swoop down to attack with one or two red Galaxians if any are nearby. If a flagship is one of the last enemies left of the screen, it will run away and appear as a third Flagship at the start of the next stage.